Museum of the River, Niamey

The Museum of the River is Niger’s premier transformational educational experience that showcases Niamey’s geologic setting and early history, the succession of Niger’s dinosaurs and other extinct creatures that capture Africa’s ancient past, Niger’s unique archaeological record of the Green Sahara, and the wildlife and wetland ecology of Isle Gaweye and the Niger River.

The Museum of the River aims to:

An international team that includes civic leaders, urban planners, scholars, architects, museum specialists, artists and philanthropists has met several times in Chicago and Niamey since 2017 to plan the Museum of the River.

Principal partners in planning the Museum of the River are located in Niamey and Chicago and include:

The Museum of the River project arose in response to urgent needs and opportunities.

Centerpiece for Niamey-Nyala. Niamey’s urban renewal plan (Niamey-Nyala) aims to unify a city built on opposing riverbanks. Isle Gaweye, a picturesque mid-river anchor for the Kennedy Bridge that first joined the two sides of the capital, is the perfect location for a national repository and exhibition center that would also protect and showcase its unique wetland environment.

Waterfront development. Despite growth of Niamey as a major urban metropolis, the banks of the Niger River that run through its center are underdeveloped. The proposed museum is key to making Niamey’s waterfront a major public attraction that protects and showcases the river’s wetland wildlife of hippopotami, bats, birds, crocodiles and aquafauna.

International exchange. Niger continues to play a central role in mitigating human migration and providing a base for regional security in collaboration with other nations of the Sahel, the United States and European Union. The museum project presents a high-profile opportunity for Niger’s international partners to support a cultural project of great national significance and lasting educational and economic impact.

Niamey, capital of the Niger Republic and located on the banks of the Niger River, began as an agricultural village founded by Maouri, Zarma (Djerma) and Fulani people. Established as the capital of Niger in 1926 with a population of about 3,000, the city grew mainly on the northeast bank of the river, expanding on the opposite bank after completion of the Kennedy Bridge in 1970. The city’s population was only 30,000 as late as 1960, when Niger declared its independence.

Today’s metro area, called the Niamey Urban Community, has a population of about 1.5 million people from all regions of Niger and West Africa as well as an international expatriate community. 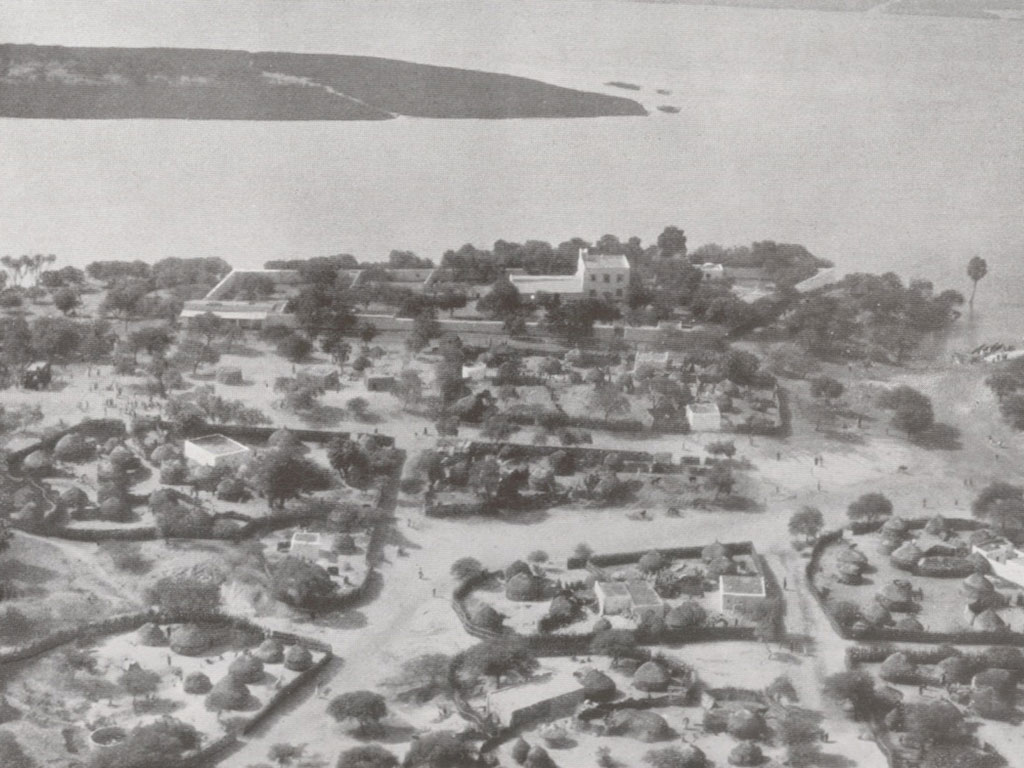 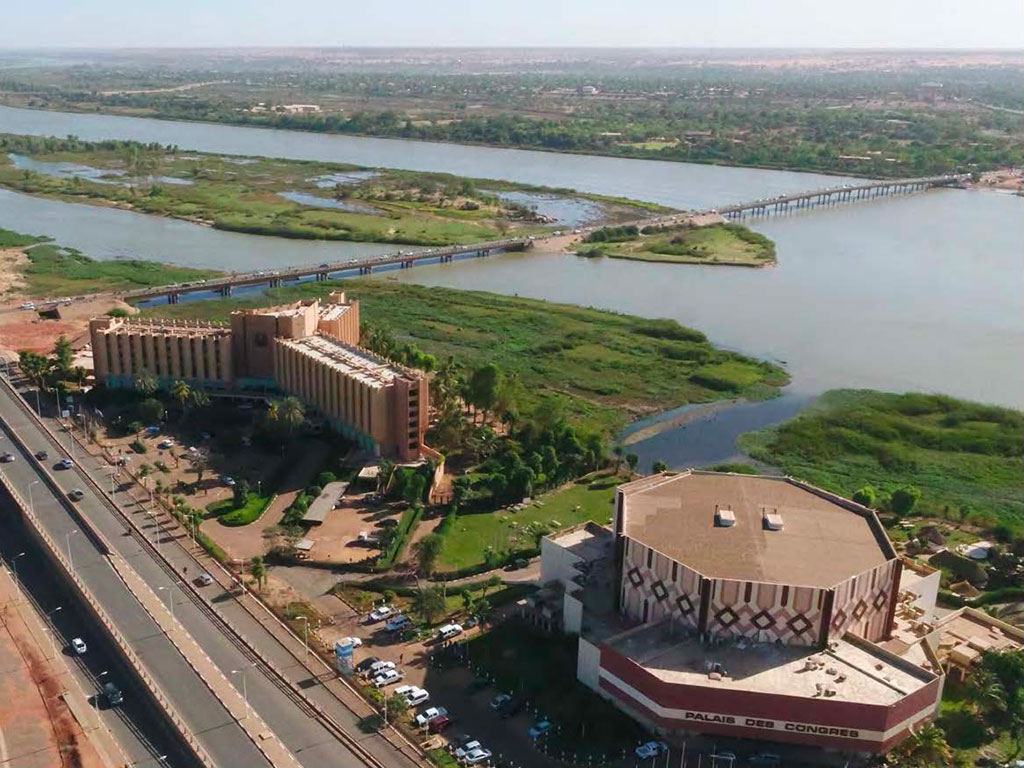 Recent and ongoing urban planning in Niamey, called Niamey-Nyala, involves transit development, stabilizing and repurposing the waterfront for pedestrian access and visitation, development of green and cultural corridors, and concentrated zones for commerce and housing. 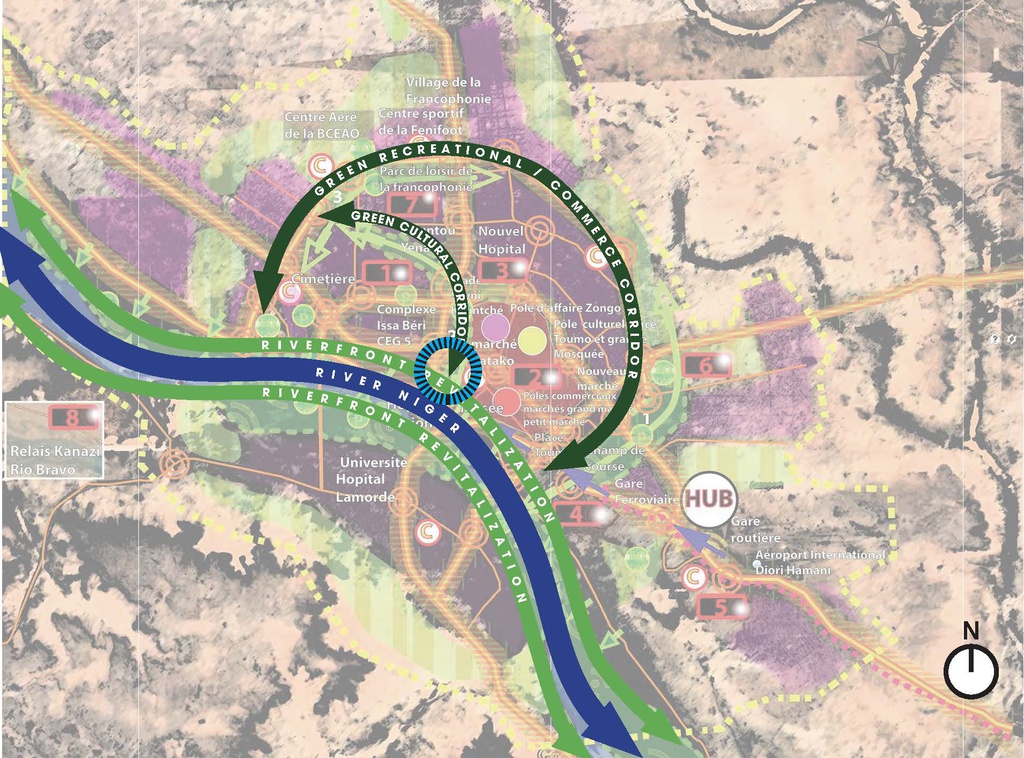 Niamey Central, the administrative and cultural center of the city, is located on the northeast bank at its junction with the Kennedy Bridge. The Boubou Hama National Museum occupies a tiered elevated location near the original historic village, bounded on the north by a small drainage into the Niger River. The Palais de Congrès and the Hotel Gaweye are opposite the Museum, and to the northwest are located the new International Conference Center and Radisson Blu Hotel. The older Grand Hotel is perched atop a prominent riverfront cliff to the southeast. On the opposing southwest bank, the Kennedy Bridge leads to the campus of the University of Niamey and the Lamordé University Hospital.

Granitic rocks more than two billion years old form the core of Isle Gaweye and provide a mid-river anchor for the Kennedy Bridge. Additional Chinese-built bridges upstream and downstream to Isle Gaweye make possible the repurposing of the Kennedy Bridge to accommodate pedestrian and bicycle traffic to the Isle. At present, Isle Gaweye is not wholly in the public domain with portions of seasonally-flooded areas now split into small plots for limited seasonal farming.

Niamey-Nyala and the Museum of the River project refocus attention to this stable island of wetlands wildlife in the heart of the capital, which has been neglected to the point of remaining anonymous on available maps. It supports diverse migrating and resident birds, fruit bats, hippos, crocodiles, fish and wetlands flora native to the river. A major theme of urban planning in Niamey is to return attention to, and make publicly accessible, its waterfront. Isle Gaweye, transformed into a natural reserve home to the Museum of the River, embodies all aspects of this mission.

The Niger River, West Africa’s longest waterway (4,180km; 2,600mi), has an unusual V-shaped course. It originates in the Guinea Highlands a short distance from the Atlantic coast (240km; 150mi), draining northeast into Mali. There it bends sharply after Timbuktu, coursing southeast across Niger and Nigeria.

The two limbs of the V-shaped Niger River were once separate rivers. The “Upper Niger” was formerly connected to the Senegal River and drained westward into the Atlantic Ocean. About 3 million years ago (end Tertiary), sand dunes cut that river off, sending it inland to a lake that exists today as broad wetlands called the Inner Niger Delta near Timbuktu. Increased water flow in the last million years eventually connected the wetlands to the “Lower Niger” river, which drains central Niger and passes south across Nigeria. 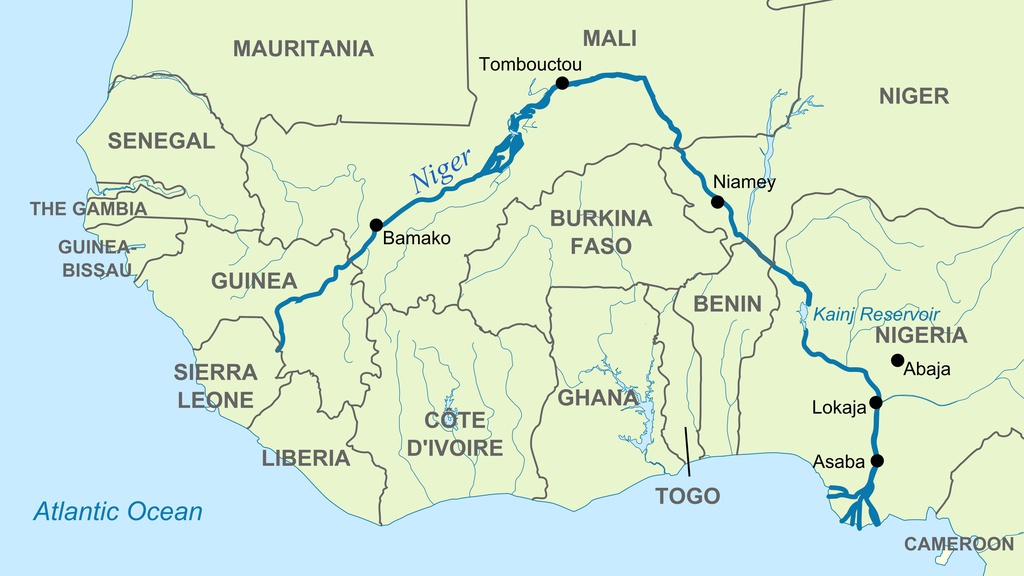 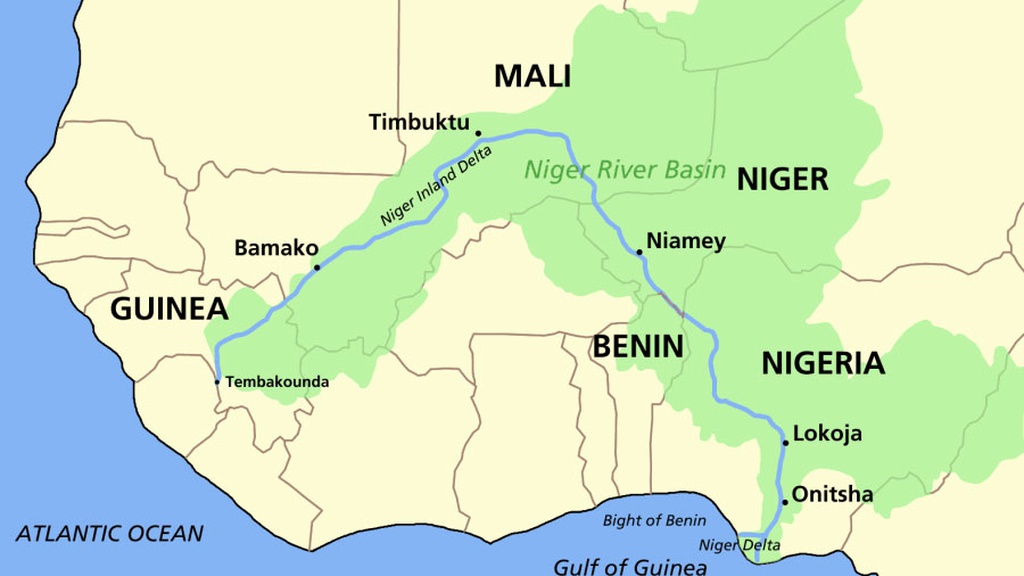 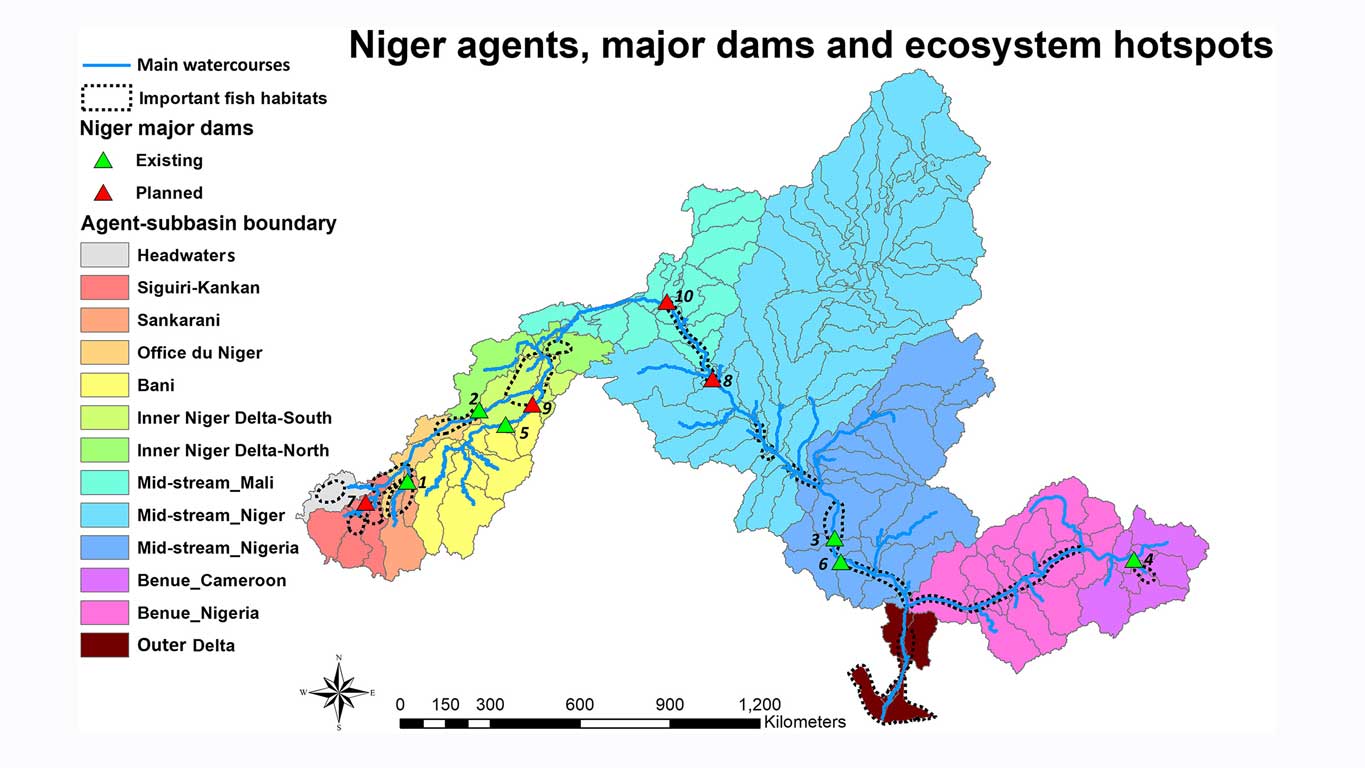 Two-thirds of the water entering the Inner Niger Delta evaporates or is absorbed. The remainder (~20km

The Niger River floods annually, peaking in November, and has dried up in major droughts in 1985 and 1990. Water volume has decreased by 30% in the last 30 years. Niger’s Kendaji Dam, began in 2008 with work ongoing, may join other hydroelectric dams on the Niger River as a check on future flooding, with record high stand in Niamey (6.7 m) in 2020 (still below the Kennedy Bridge, the level of the proposed museum). 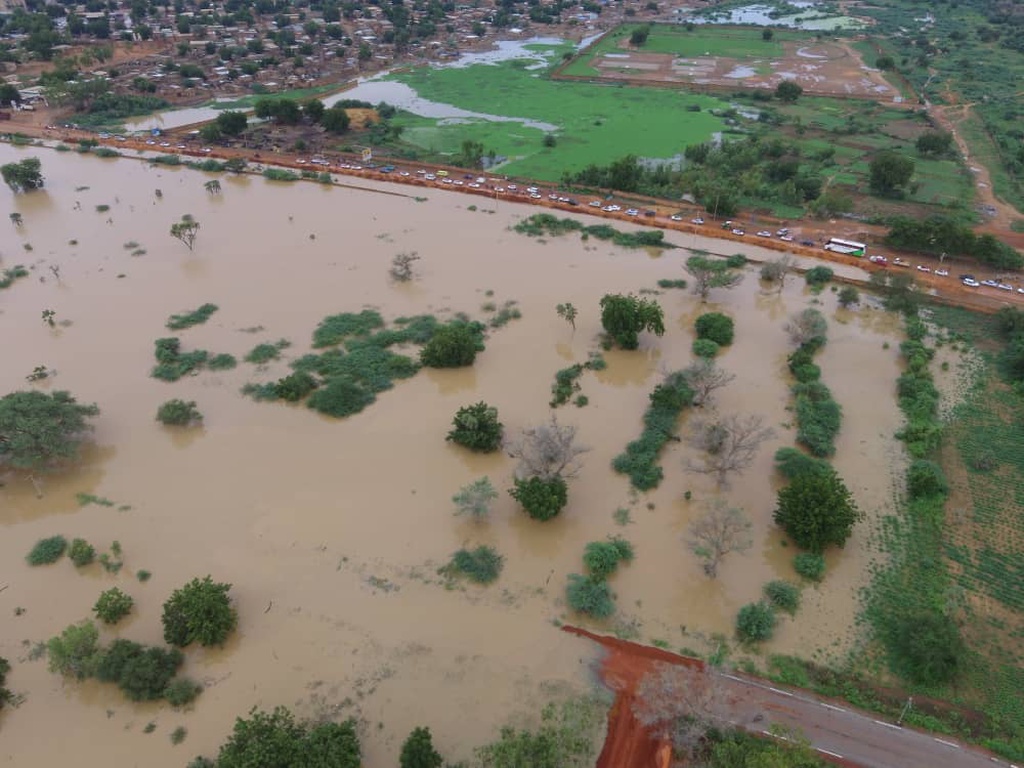 On August 27, 2020 the Niger River peaked in Niamey with 1 m of water flooding low parts of both banks of the city.

The northwestern end of Isle Gaweye, just off the Kennedy Bridge, is the site for the Museum of the River. Access plans include a tree-lined pedestrian access via the bridge, a vehicular drop-off circle near the museum and boat landings on both sides of the island.

Isle Gaweye and the Kennedy Bridge. 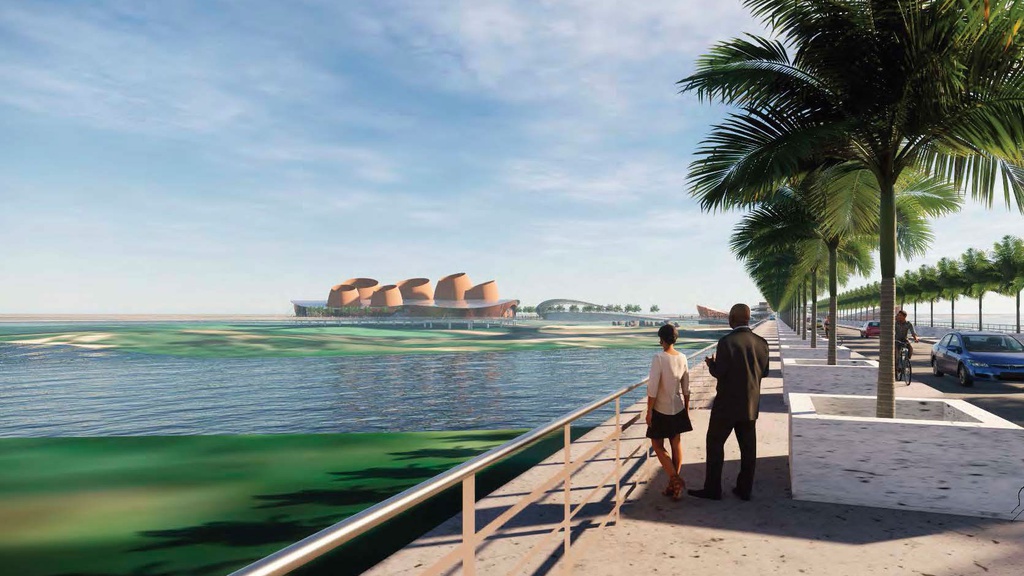 Kennedy Bridge view of the museum. 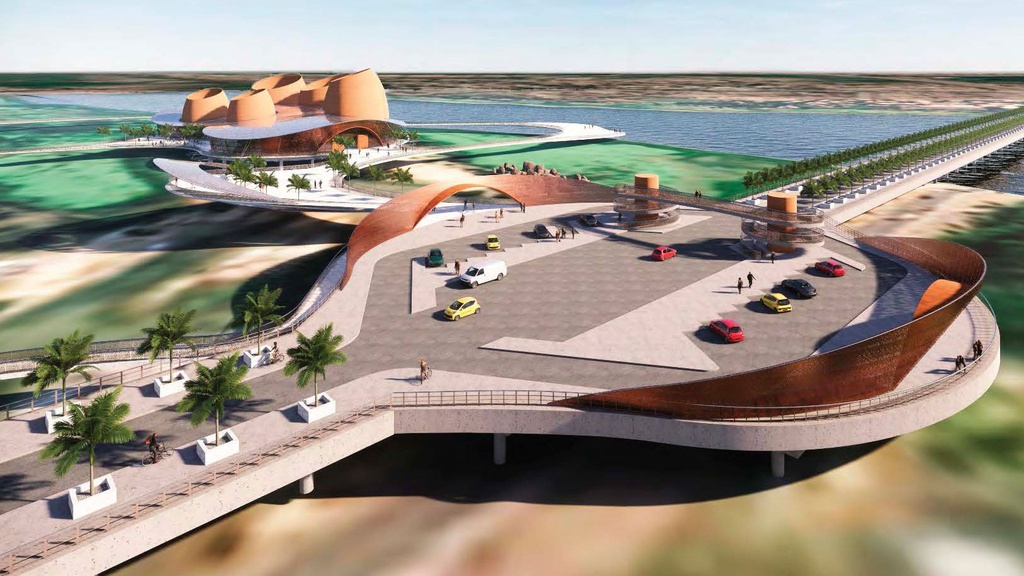 Aerial view of the bridge drop-off.

Isle Gaweye provides a centrally-located and highly visible, yet natural, setting for the Museum of the River. The location would enhance public access to Niamey’s iconic island, which would better serve its home city and country as a protected ecological reserve. The Isle Gaweye site would unite the two sides of the capital and stimulate waterfront development (restaurants, retail, boat tours) on opposing riverbanks.

The Museum of the River tells the ‘story of Niger over the ages’ from its geologic inception, across chapters in the Age of Dinosaurs, through climate change that once greened the Sahara, to the present wetlands ecology of Niger’s principal waterway.

The museum is a passage from deep to recent time, a sequence of masonry galleries sheathed in decorative tile from Nigerien craftsmen that showcase Niger’s priceless objects of antiquity, culminating in a celebration of the wetlands ecology that attracted Niamey’s earliest inhabitants. It provides fresh perspectives on Niamey’s cityscape and the beauty of the river at its heart.

The narrative for this extraordinary museum will express its:

The siloed gallery design of the Museum of the River reflects Niamey’s early founding in the 18th century as a cluster of riverbank villages linked to the Niger River. Its cavity-walled galleries and proximate location to cool waters are key to an award-winning, energy-positive design that positions the Museum of the River at the vanguard of modernist green architecture, emphasizing sustainability and resiliency. 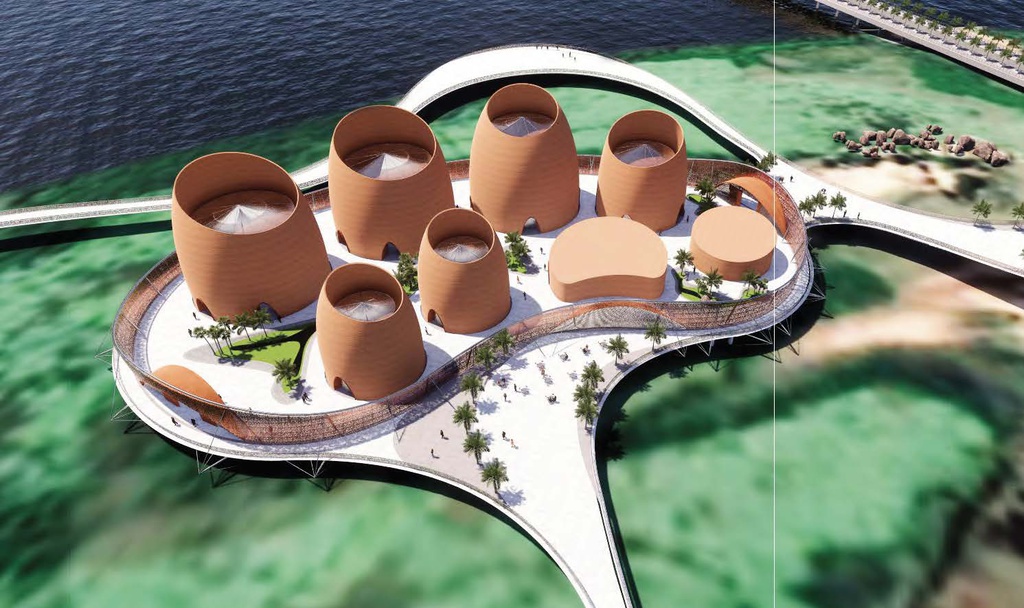 Aerial view of the Museum of the River with its translucent canopy removed.

Stepping off the Kennedy Bridge onto Isle Gaweye, the visitor overlooks some of the oldest rocks in Africa, the sculpted boulders of ancient granite. These rocks, which record the assembly of the continent some 2 billion years ago, greet visitors to the Museum of the River. 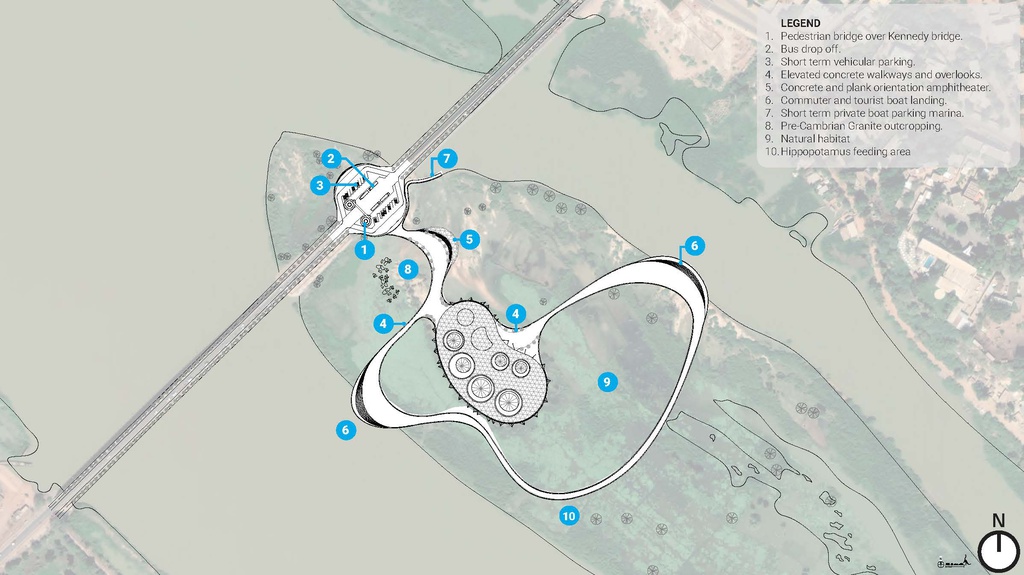 Site plan for the Museum of the River, Niamey. 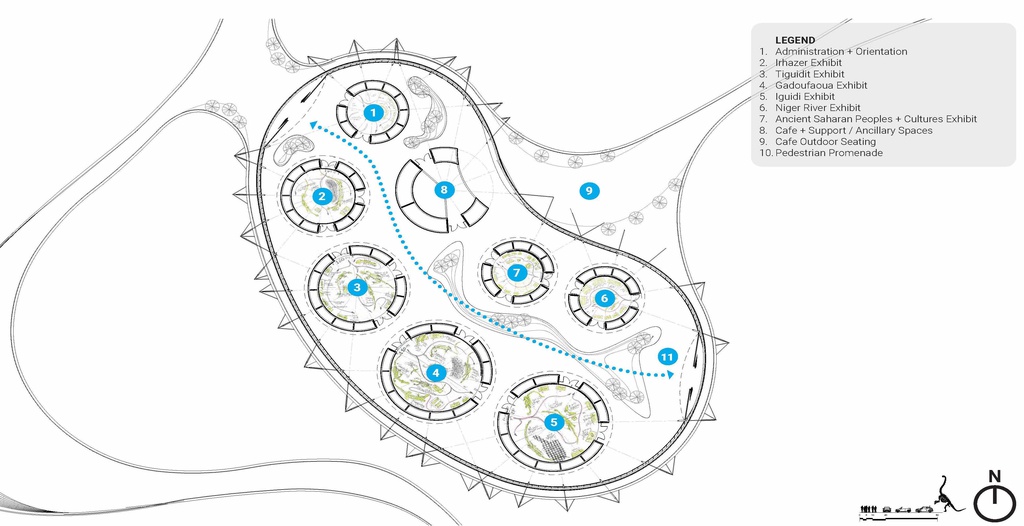 Gallery plan for the Museum of the River, Niamey.

Seven galleries tell the story of Niger in sequence, from its geologic birth to today’s setting of the capital on West Africa’s greatest riverway. 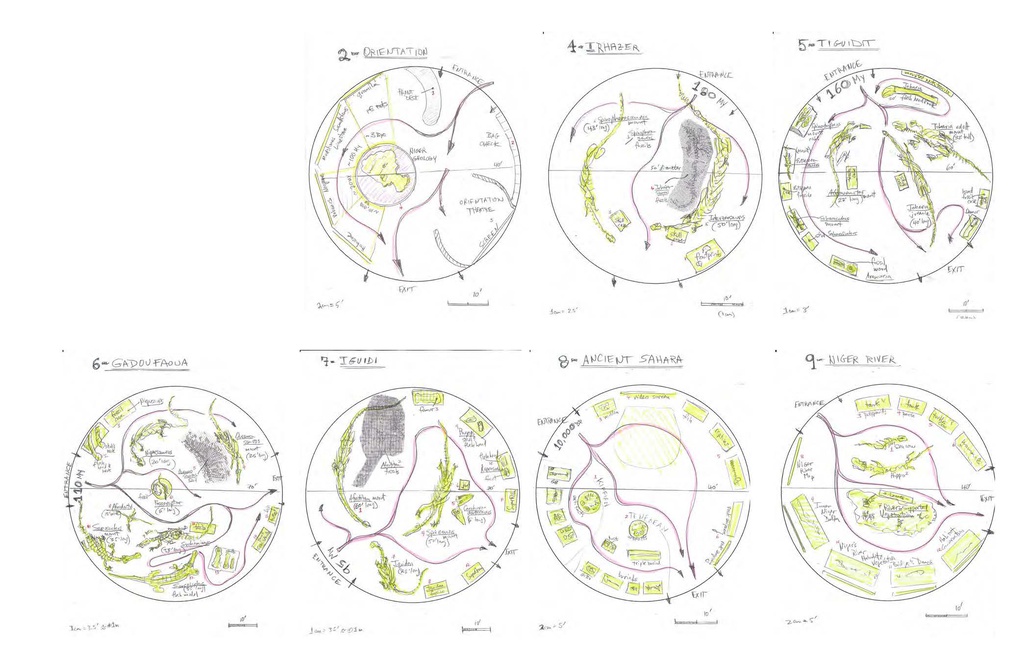 A themed café and retail space occupy the last structure, overlooking the river and downtown Niamey, and the program concludes with an elevated promenade for an intimate view of wetlands wildlife.

The seven galleries of the Museum of the River are joined together by a tensile translucent canopy that allows light to penetrate but protects visitors from excessive solar radiation. Within the galleries, controlled natural light is the primary source of illumination, with cavity walls enhancing passive ventilation. 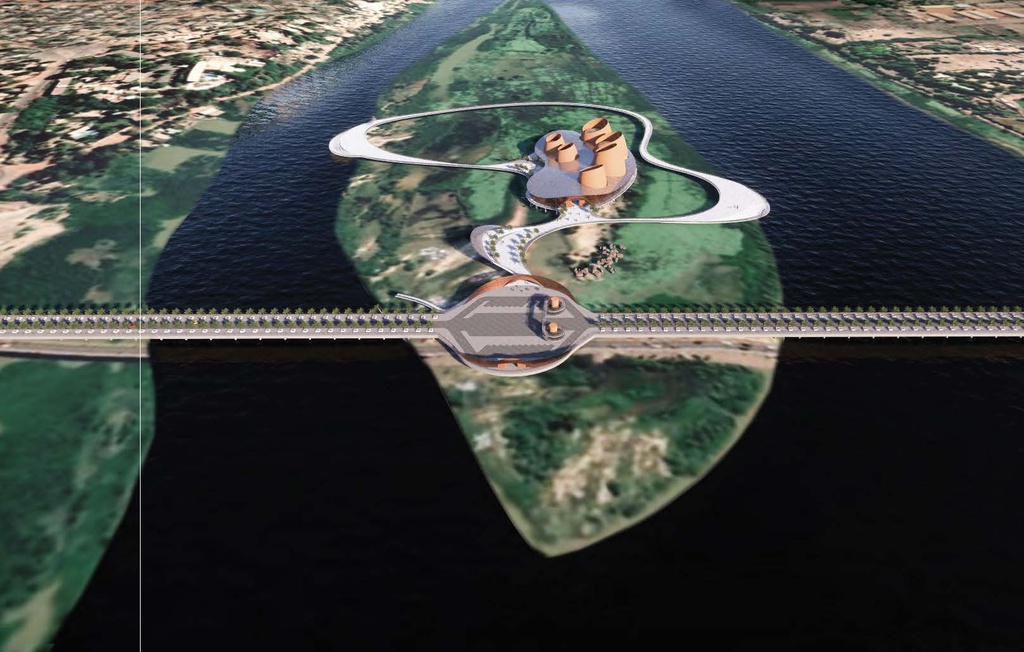 Aerial view of Museum of the River. 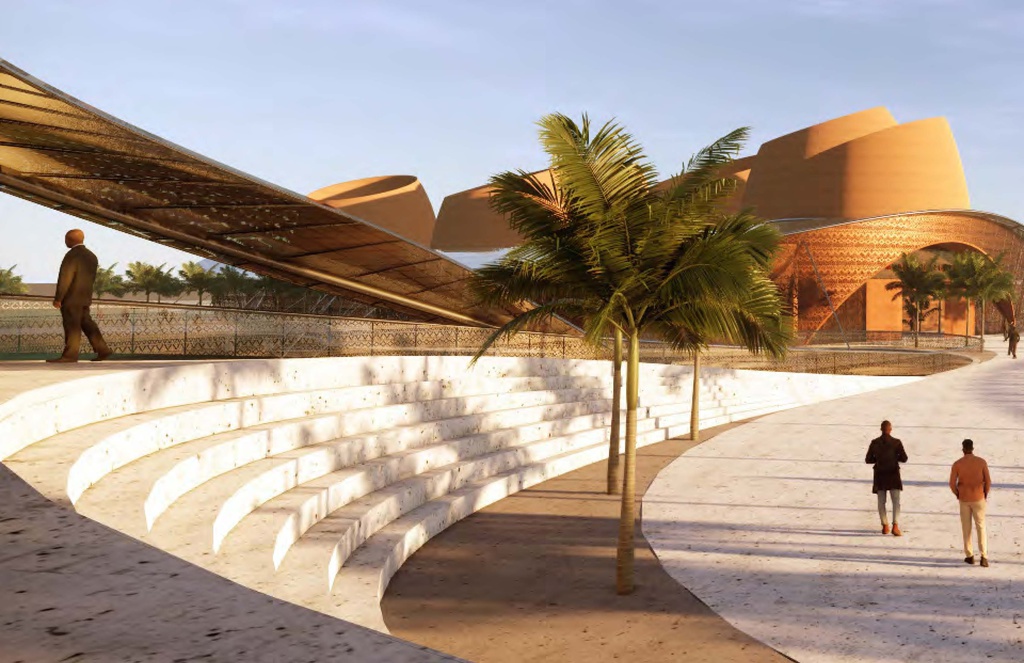 Platform view of the Museum of the River. 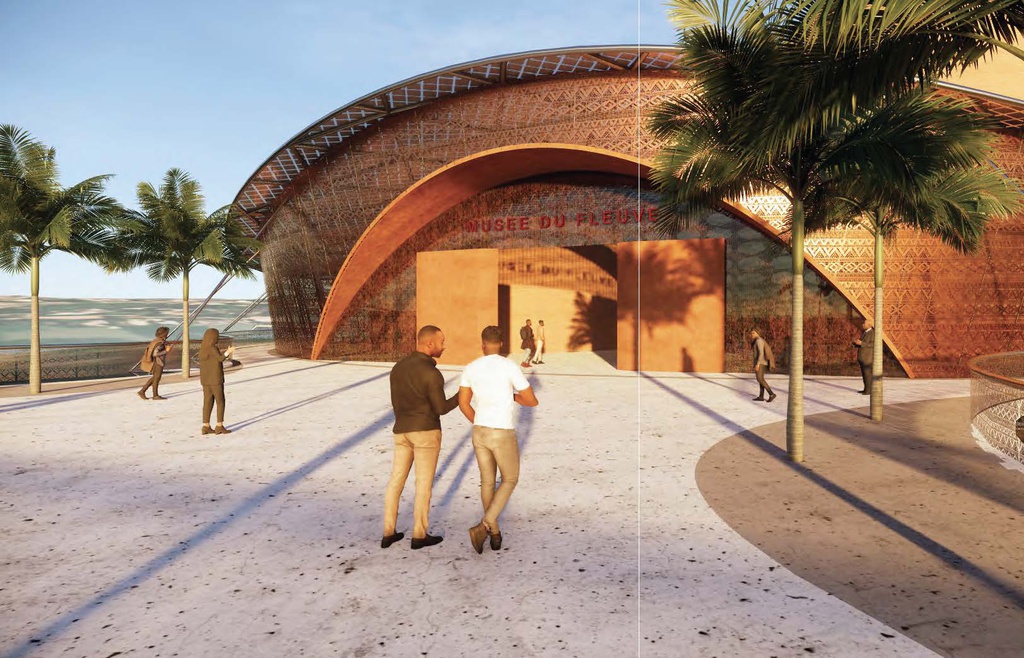 Entrance view of the Museum of the River. 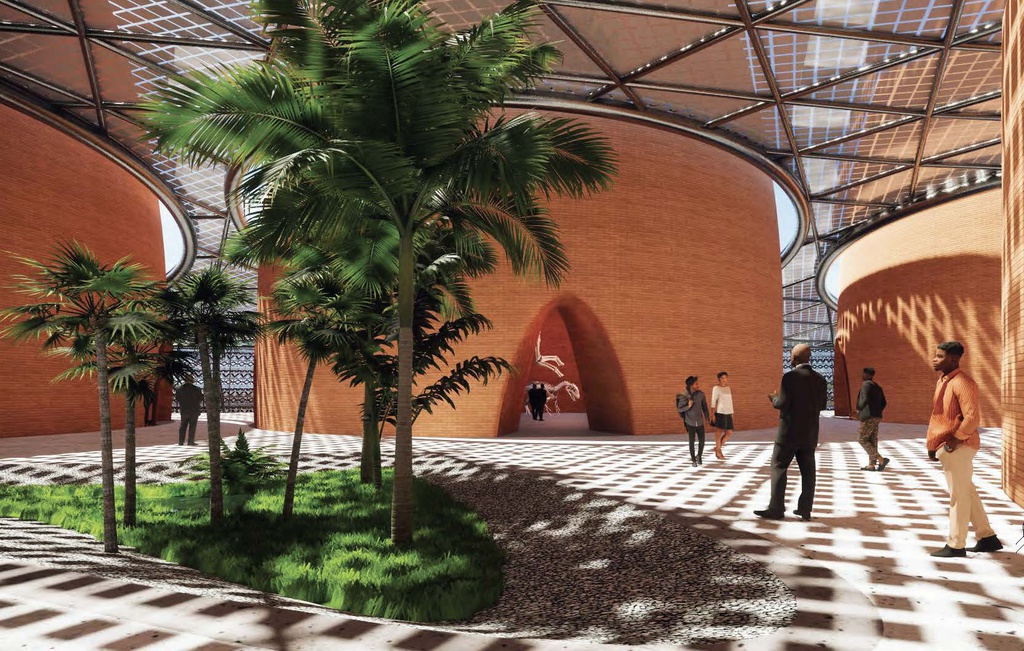 Courtyard view under the canopy.

Gardens themed to local plant assemblages will occupy several spaces between the galleries under the canopy.

The Museum of the River includes non-exhibit ancillary spaces, some of which are indoors and others outdoors.

Its artistic innovative design has already won an international award. 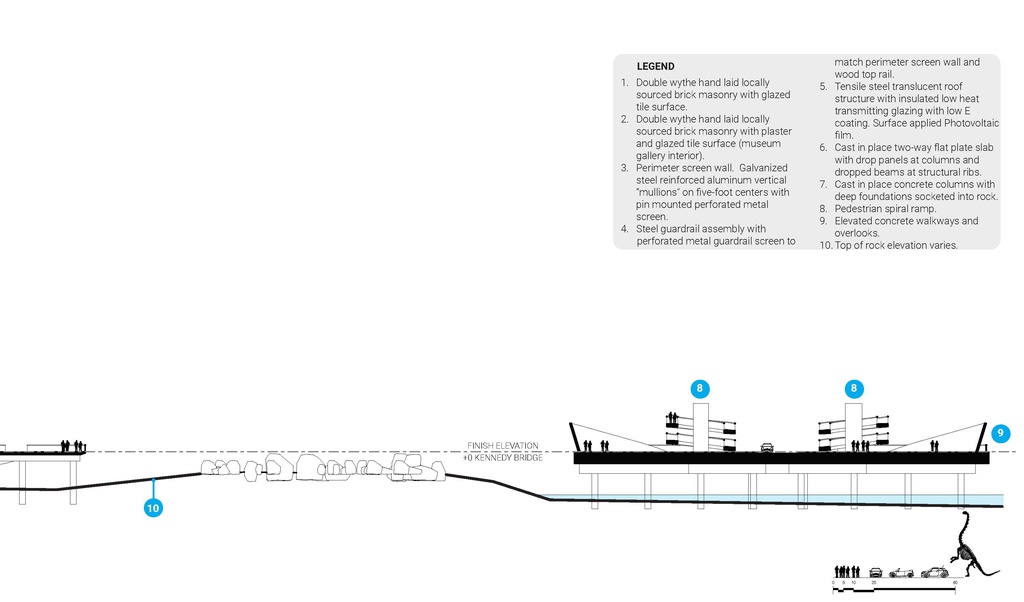 Side view of the Museum of the River from the north. 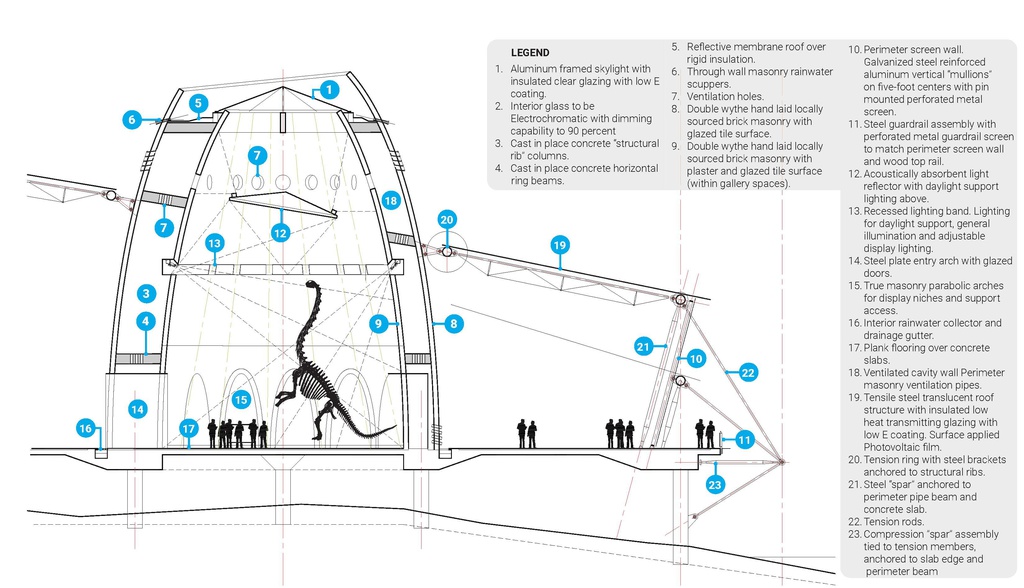 Cross-section of an exhibition gallery and adjacent external platform. 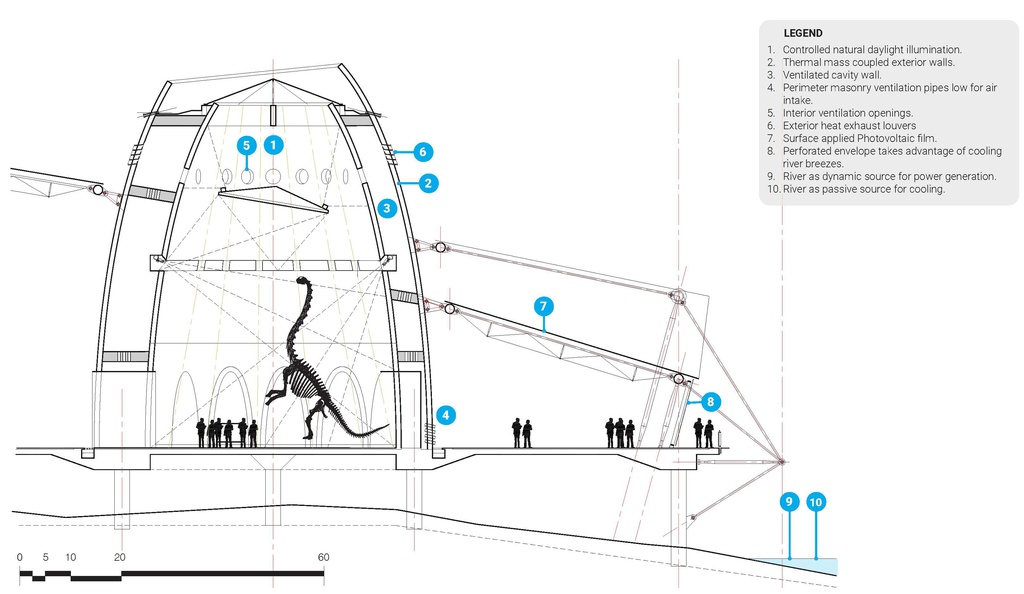 Energy is generated via photovoltaic film on the canopy and water flow in the river. Temperature reduction is accomplished by thermal mass-coupled cavity walls, passive internal ventilation, and passive water cooling. Dust is reduced by ventilation louvers. 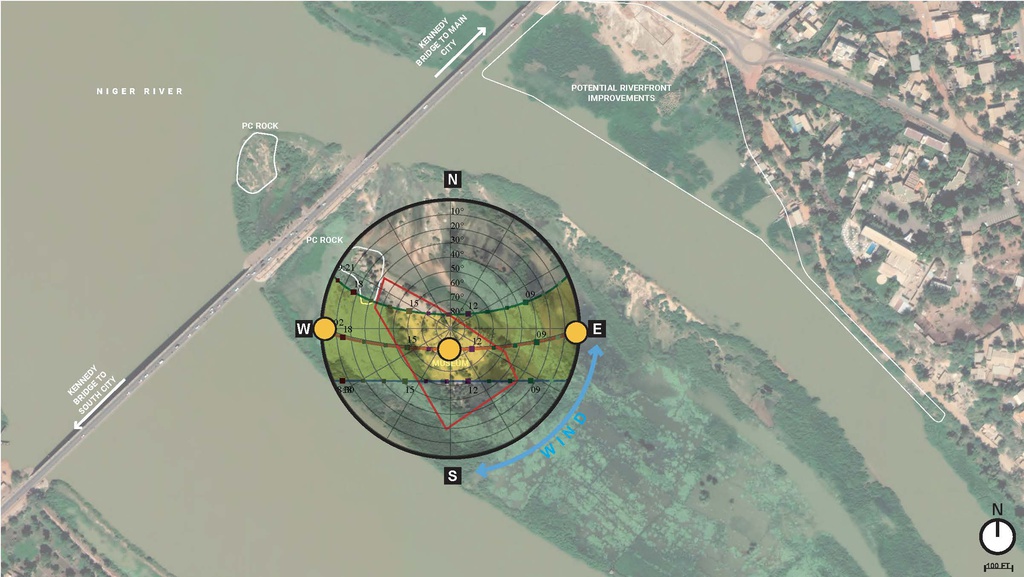 Solar path over the Museum of the River.